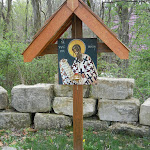 The shrine for St. Gregory of Nyssa is located in the Infant Memorial Garden and is named for the saint who wrote a piece entitled, On the Death of Early Infants. This work, which was actually a letter to a bereaved father, was profound in that it went totally against what was being written by St. Augustine and other theologians in the west. In his work, St. Gregory argued that infants who died without the opportunity to sin are pure and should be considered neither children of hell nor children in limbo. Rather, in the thinking of St. Gregory, when we look at Jesus Christ we see a loving Lord who commanded his disciples not to hinder the little children from coming to Him, “for of such is the Kingdom of Heaven” (Matt. 19:14).