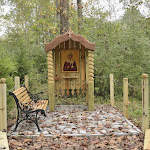 St. Anastasia was a fearless young woman who lived during the 3rd century in Rome. She spent her time visiting Christians who had been imprisoned for their faith in Jesus Christ. She was gifted in the medical arts of the time, and succeeded in bringing healing to many who had been poisoned in prison. For this reason, she earned the title “Deliverer from Potions.” Caught in the act of aiding Christians, St. Anastasia died a martyr’s death under the Emperor Diocletian.

This shrine was modeled after the shrine to St. Theckla at the Antiochian Village in Ligonier, PA. St. Anasatasia is a patron saint of those suffering from various addictions.