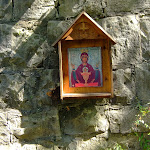 In 19th century Russia, a man suffering terribly from alcoholism had a dream directing him to go and pray before this icon at a distant monastery. The paralyzed man dragged himself along for a day in obedience. That night his legs began to heal, and he continued to limp toward the monastery the next morning. By the time he reached the monastery, his paralysis was completely healed. Upon reaching the icon, he offered prayers of thanksgiving to Christ and to His mother for her prayers. Soon he was totally released from the bonds of addiction.

Suffering souls still come to pray before this icon of Christ in the chalice, an image of Communion, which is truly inexhaustible! 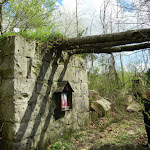